Over the last few days I have been reading the story of a man called Joshua, who was the guy who took over from Moses. Joshua was given a task to do and not only was this task absolutely huge, it may also have sounded a little bit crazy!

God asked Joshua, along with his army, to march around the city of Jericho for seven days and then the walls would fall down and Joshua and his men would take the city. These walls were between four and five metres high and almost two metres thick.
I wonder if I was asked to do the same whether I might have just laughed out loud?!?!

Yet, Joshua did as he was instructed. They marched around the city once a day for six days and then on the seventh day they marched round seven times and at the sound of the trumpet and at the shouts of the men, the city walls collapsed! WOW!

Joshua faced a monumental task yet he doesn't appear to argue, instead he simply follows the instructions he has been given and also inspires others to do the same.

I would like to find the courage to follow Joshua's example. I believe he saw with eyes that were wider than the situation he found in front of him. Joshua had a faith and a trust that was steadfast because, when faced with what seems a crazy solution to the situation he and his men were facing, they still marched on out.

As they stepped out to take new ground, they went boldly because within them, they had confidence in what they knew about God and what they had seen Him do - deep inside of them must have been the courage to trust. This gives me confidence as I step out into a new chapter of my life.

Sometimes thoughts overwhelm me as do my feelings of fear and insecurity. I can get caught up with feeling that I cannot possible take on this huge task in front of me because I feel that I am not good enough.
However, deep within me, I am able to find the strength to trust and to know that is simply not true. I am able to step out and collapse my wall.
With every sun my faith and trust grows and my eyes see further than the situation I find myself in. My heart has hope and I feel able to march on believing and experiencing that I am held.

I do not know where my marching will take me, yet I will continue on because I know that the One who marches alongside me has also gone before me. I will bravely step out into the newness with expectation and with hope because He makes all things good! 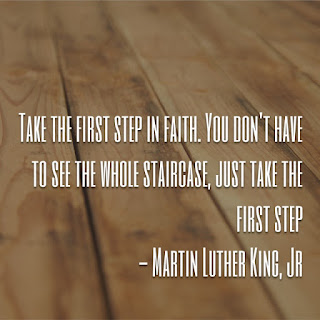 There are times when I just want to not have to think. When I would like to switch off my brain because all the thoughts running through my head are 1) taking me in the completely wrong direction and 2) painful.

Usually, in moments like this, I will reach for the iPad and play Suduko or watch something on TV - although TV is not currently an option as I gave it up for lent and I have come to the conclusion that I play Suduko just a little bit too often.

So, I have been trying to use these moments more constructively. Sometimes it works other times I manage to convince myself that I really do need more practise at placing the numbers 1-9 in a square!

Although when I do persevere it often brings blessing. There have been times when I have picked up a book instead of the iPad and I so needed to read the words of that particular chapter. Sometimes it may be a chapter I have read before but because I could not remember where I was up to, it is now a chapter I have read again! Yet, those words were meant to be read again because they were the words of encouragement I needed to be running round my head - far better and more helpful than the negativity and fears that had been chasing around previously. 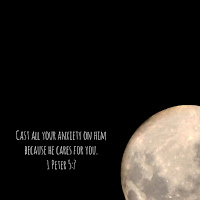 It is an effort, however when I talk myself into talking to God rather than just listening to my voice, I find myself fixing on truth rather than on unhelpful uncertainty.

When things happen of which I have no expectation or seemingly no control over, the first thing I tend to do is think. These thoughts often go into overdrive and when there is no one there to interject or to give support, then there is no telling where these thoughts may take me.
However if I stop. If I change direction rather than just trying to switch off then I give myself an opportunity to find those better thoughts.

It's almost like having a little supply of 'good thoughts I can go to when negative ones are dragging me down'!!

If I choose to not make the effort to read and absorb these words of truth, then how will I top up my supply of what is good? Instead, if I build up that supply I have a better chance of being able to deal with whatever it is that is causing the need to feel I want to switch off.

This treasure that I am learning to build my foundation on provides the opportunity to fix on what is good and true, which can then bring peace. When fear and worry is chasing round my head I do not have peace. Thinking negatively is not helpful and leads me in completely the wrong direction.

One of these treasures I am continuing to learn is that with every sun comes a new day. So in this new day I will aim to not take myself to a place where I feel I need to switch off my thoughts. Instead I will switch my thoughts to what I know is true and good and I will hope to keep these things running round my head, however tricky that might sometimes be.
Posted by Ruth Lilley at 08:56 No comments: 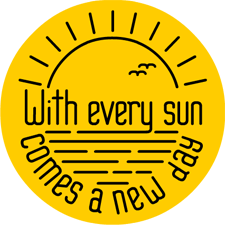 Please subscribe if you would like to receive 'With Every Sun Comes A New Day' posts to your email.

I promise not to share your email address with anyone.